If you’ve been playing roulette for a while, chances are that you’ve run into the Martingale system before. Actually, even if the name doesn’t sound familiar to you, it’s likely that you’re well-acquainted with this classic strategy that some players believe will give them an unstoppable edge over the casino. While that’s not exactly true, the Martingale is still one of the most popular betting systems for roulette used by Australian players, and it’s helpful to understand exactly what’s going on when people use this betting technique.

How the Martingale Works

In order to use the Martingale system, you’ll need to start by making a comfortably small bet. At a live casino, this will usually mean you’ll start with the minimum bet available at the table; in an online casino, the minimums are usually even lower, so you can start there or at any level that feels comfortable to you.

In the Martingale, you’ll be making the same bet time and time again. In order to use the system, you’ll need to pick a particular even money bet such as red or black. You’re going to bet on this same bet over and over again; this is traditional, though you can safely buck this trend and wager on different even money bets as you like – we’ll explain why later. 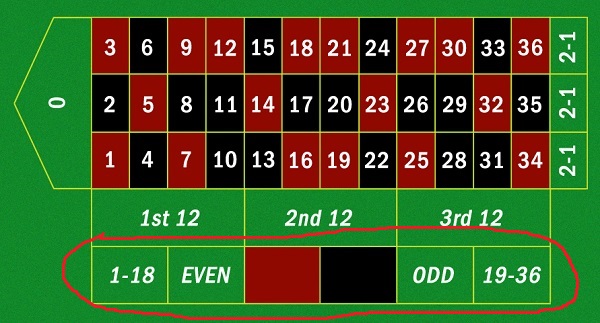 If you’ve made your bet and you win, congratulations: you can collect your winnings and start over again. If you lose, though, that’s where the Martingale really comes into effect. After each loss, you’ll want to double your bet – a pattern you’ll continue until you manage to win.

Here’s a quick example that should show how this works. Let’s say that you’re betting on red, and that your first bet is $5. If you lose, your second bet will be $10. Lose again, and now you’re betting $20. You lose yet again, and now bet $40! You win that bet, collect your $40, and go back to betting $5 on your next spin.

To understand why people like playing this system, we’ll have to take a closer look at that sequence. Although you lost three bets and only won one, you still made a small profit. Your three losses totalled $35, while your win was for $40 – meaning you came out ahead by $5. In fact, any time you have a string of losses followed by a win, you’d come out ahead by exactly $5, or whatever the size of your initial bet was. Since the math says you should always win eventually, the Martingale seemingly guarantees that you’ll always come out on top in the long run.

Issues with the Martingale System

It can’t possible be that simple, though, could it? Of course not – there are several issues you should be aware of before you use the Martingale system. That doesn’t mean this system isn’t fun, or that there aren’t some legitimate reasons why you might want to use it, but it’s not without its problems.

First, even if you’re not sure why, chances are that you’ve realized that the Martingale system can’t possible guarantee you a win. If that were true, how would the casinos stay in business? Actually, the Martingale could theoretically guarantee the player a win if two things were true: the player had an infinite bankroll, and the casino was willing to take bets of infinite size.

Obviously, you’re not likely to find yourself in that situation anytime soon, and those two constraints are serious problems if you plan to use the Martingale. While it might seem unlikely, you will eventually run into a losing streak that eats away either at your entire bankroll, or hits the table limit, meaning you won’t be able to double your bet.

For instance, take a casino table that offers a $5 minimum bet and a $500 maximum bet. It would only take you seven losses before you could no longer double you bet, as your 7th bet would be for $320, and you cannot make a $640 wager. What are the odds of losing seven times in a row on an even money bet? At a European roulette table, this will happen approximately once every 106 times you start a new Martingale cycle.

Unfortunately, that’s too often for you to make a profit from the Martingale system. The 105 times you win, you’ll win $5 each time, for a total of $525. The one time you lose, you’ll lose a total of $635 from your seven bets – which works out to a loss of a little more than $1 on each cycle. In the end, you’ll average losing the same amount a money as you would playing any other system in roulette: about 2.70% of the money you bet, according to the house edge.

One of the big misconceptions that leads some players to use the Martingale system is known as the Gambler’s Fallacy. Put simply, it is the belief that a result can be “due” if it hasn’t occurred in a while. This is what many people believe when they are playing roulette and using this system; they think that if, for instance, black numbers have been hit several spins in a row, a red number is due to come and even things out. (You might also be interested in our article about misconceptions related to pokies.)

Unfortunately, this isn’t how probability works. Each spin of a roulette wheel is an independent event, and the results of previous spins do not affect future spins in any way. As long as the wheel is fair, every spin has the same chance of resulting in any number, regardless of recent results.

Some players may think that this seems unlikely. After all, if a roulette wheel is supposed to hit red and black equally in the long run, shouldn’t that mean it has to make up for prior results? For a simpler example, shouldn’t a coin have to eventually land on heads as often as it has landed on tails?

The issue here is that probability never says that the coin will ever land on heads and tails exactly 50% of the time each. Instead, it says that as the sample size of flips gets larger and larger, the result will approach 50%. While after 100 flips, there might be 60 heads and 40 tails (a 60% rate for heads), after 1,000,000 flips, it’s extremely unlikely that either heads or tails would have been flipped even 51% of the time. That said, over that huge sample, there might be a few hundred more heads or tails – but that’s a very small difference over such a large number of flips.

In summary, you’re just as likely to lose your 8th bet as your first, so don’t count on a number being due to make the Martingale system work for you.

Despite everything we’ve said, that doesn’t necessarily mean you shouldn’t use the Martingale system when you play roulette. In fact, for some players, it might be exactly the way you’d like to play!

The Martingale is perfect for players who are willing to win a little bit of money almost every time they play in the casino. If you’re not interested in chasing a jackpot, but just want a good shot at coming out ahead of the game, the Martingale will maximize your chances of finishing each of your sessions with a tidy profit.

Of course, there’s a downside to this: you’ll occasionally suffer a big loss in exchange for all of those small wins. But these will be relatively rare, allowing you to enjoy a lot of winning nights in between.

One of the world’s leading online betting and gaming companies has announced a new distribution deal. European Gaming reports that 888 has teamed…

A Long Island casino has been sold by operator Delaware North, to the company that has long been operating the venue’s gaming machines. Casino.org…